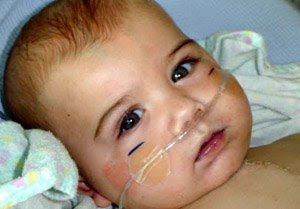 We are still at Children's and still in the ICU. The top part of Luke's heart is being slow to "wake up" and so he is still being paced by a pacemaker. They have just turned it off this morning to get a better idea of what his intrinsic heart rhythm is. It's kind of confusing, but basically there is a node in the atria (the top chambers of your heart) and a node in the ventricles (the bottom chambers) that both receive electrical impulses which make the chambers contract. If the sinus node (the one in the top) doesn't fire, the lower one takes over. That's called a junctional rhythm, which is where Luke is at. They want to see a sinus rhythm, where the top node in the atria dictate the heart rate. If that doesn't make any sense, it doesn't surprise me =) Who would have ever thought Rog and my vocab would include such terms??

In the short term, this means we have to stay here until 1) his sinus node starts working again, 2) his heart rate without the sinus node firing is high enough for the meantime, or 3) they decide Luke needs a permanent pacemaker put in. They've seen it take several weeks for that sinus node to become active again after such a major surgery. A lot of times, the heart tissue is swollen and can cause the inactivity. 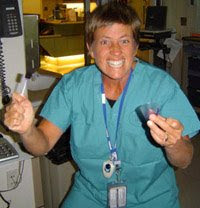 Watch out. Nurse Kim is on a
mission to kill that thrush! 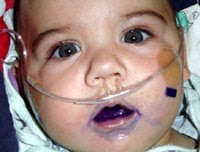 Luke with his purple-stained
mouth from thrush treatment

Luke also developed thrush yesterday from all the antibiotics he was on, so we think he's pretty miserable with that, along with not really wanting the bottle (we think it may bother his tongue?). This really is the hardest part of recovery. As a mom, you just don't want your baby to be miserable, and he is really miserable. It seems like every time he finally falls asleep, it's time for his next medicine or his vitals need to be taken. I just want to take him home. I know we'll get there, but it's tough.

Other than that, Luke is doing really well. Good blood pressure and sats, no fever, etc. We did get a few smiles out of him yesterday and today, so that was a huge blessing. And we brought his Baby Einstein DVD and that seems to help distract him for a little while =).

Please pray for Luke's heart to get back into a good strong rhythm and that he would not need a pacemaker. Please also continue to pray for his comfort level. Thank you all for your thoughts and prayers!
Posted by The Smith's at 1:31 PM