I wonder why Luke likes camp? 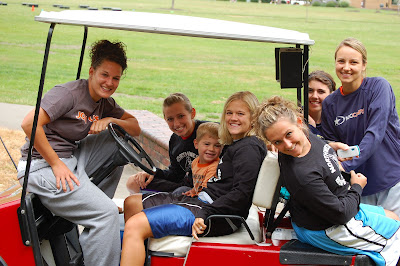 Another fun part of camp is that we get to see people we love more than usual! The Stewart family came down south for the week and Luke fell a little bit in love with their oldest, Ellie.

We took the kids to the zoo on Tuesday and any time Luke was out of the stroller, you'd find him reaching for Ellie's hand. 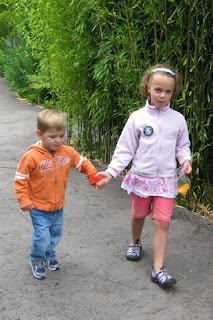 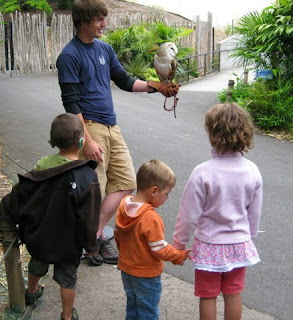 Subtley isn't quite in his vocabulary yet.
Posted by The Smith's at 7:29 AM 2 comments

Luke's first dentist appointment was scheduled for today at 10:30. I was keeping my fingers crossed we'd get him through a cleaning, but at the least I wanted our dentist to get a good look at his pearly-whites. With his reflux history and his sugar-flavored medications, I have always worried a bit about his baby teeth.

When we got there, the hygienist asked me if Luke needed any antibiotics prior to a cleaning. "To a cleaning? No, I don't think so." I consider myself to be pretty CHD-savvy and had remembered Dr. S. saying Luke most likely wouldn't need antibiotics before seeing the dentist. The hygienist pushed a bit (thankfully!) and I told her I could confirm with his cardiologist's office. I called and lo and behold, Luke would need to take antibiotics an hour before a cleaning, but only because he is within six months of his angioplasty. Who knew!? I am thankful our dentist's office was cautious and thankful our cardiologist is so accessible. So Dr. Edlund got a good Luke in Luke's mouth, deemed his teeth to be looking good and said we could schedule a cleaning in the winter, after the six months is up.

He could tell Luke loved on his pacifiers and said his bite will probably improve now that they are all "broken". I was so relieved to hear Luke's teeth are fine, and with this cheesy grin, you can tell he was relieved to get out of having his teeth cleaned (there has to be some perk to having an angioplasty, right?)! 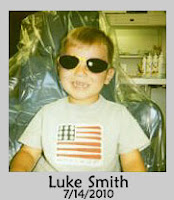 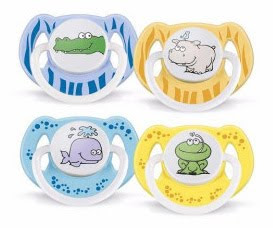 Last Saturday was the day. We had been putting it off for too long, hoping that some research would fall from the sky that mimis (pacifiers) are actually recommended for kids over the age of 3.

Last Saturday was the day and I'm not sure who was more sad, me or Luke. Actually, I do know. It was me. I have yet to understand why I was so attached to these plastic things, but I was. I loved them because Luke loved them. And I didn't want to take away something that brought him so much joy and comfort. Maybe it's as simple as that.

Thanks be to God, Luke has handled this parting so much better than I ever expected. 10 days later and he hardly asks for them and we are back to him falling asleep by himself at night. I expected weeping and gnashing of teeth.

A few families shared with us their tactic of snipping the ends off the mimis, so that's what we did. Roger snipped it and then showed Luke, letting Luke lead. "Why is my mimi broken?" Once he said that, we ran with it. Rog explained that when mimis get old, they break. Then he asked him if he wanted to keep them even though they were broken, or if he wanted to send them away and get a new toy. Of course, not having full capacity to foresee future feelings, Luke picked the new toy.

We put him in his crib for nap/quiet time (we knew he wouldn't nap), and he happily played with his new toy for an hour in his bed.

At bedtime, we decided he could fall asleep in our bed for the first night without his mimis. He never really cried, but for about 30 minutes, he whined and whimpered and asked for them. He told us he couldn't do it and that "this was not working". We told him yes, he could do it and mommy and daddy were going to help him. And then? Then he fell asleep.

The next 4 or 5 nights one of us would sit in his rocking chair in his room until he fell asleep. But he would eventually fall asleep. It helped that he wasn't napping during the day, so he was more tired at night. He talked about it a lot while he tried to fall asleep, not yet confident that he could do this. But we knew each night he was gaining confidence and finding other ways to soothe himself.

By night 6, we were only staying in his room with him for 5 minutes and then leaving him to fall asleep on his own. Amazing. I really never thought it would go this smoothly.

One afternoon he was down at my mom's house and I had asked her to try and nap him since he had gotten up so early that morning. After lying in bed for about 45 minutes, he got up and went to the drawer where my mom kept her mimi stash. Of course, she had gotten rid of them, but when he opened the drawer he told her, "Nonna, I can smell my mimis in here."

On Sunday, a week after we had tossed them, Luke was playing in our bonus room while I was in the adjoining laundry room. "Mamaaaa, I have a surprise for you!" he sing-songed as he came to where I was. He had something behind his back and a mischevious glint in his eye.

"Look what I found!" he said as he pulled out a fully-functional pacifier from behind his back. I had no idea what to do.

He put it in his mouth for a couple of seconds and then pulled it out. "It's not broken!" he declared.

"You're right, honey, but look how dirty it is! Yuck!" I placed it on the counter and prayed that would be the end of the matter. (Hey, there's no manual for this stuff! It was the best I had.)

And you know what? That was the end of the matter. He turned around and went back to playing.

So, here we stand. Mimi-less and doing okay. I may need therapy, but Luke is doing just fine.
Posted by The Smith's at 7:05 AM 5 comments