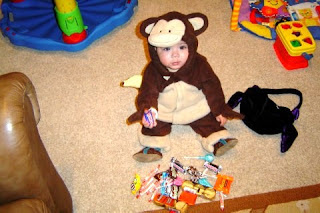 Wanted to post a couple of pictures of Mr. Luke in his first Halloween get-up. Our neighbors were very generous with their "treats". Treats that mom and dad will enjoy more than toothless Luke =) 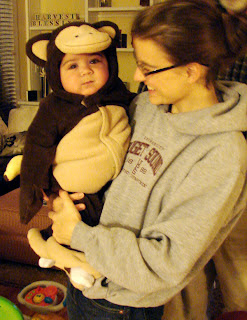 Your prayers at work

Luke's x-ray looked MUCH clearer this morning and Dr. Stefanelli was very pleased (surprised even at how much his right lung had cleared up in just 4 days). He is dropping one of Luke's Lasix doses and we'll do a follow-up x-ray in three weeks to make sure all still looks good. He may make a few more adjustments to his medications at that point, too. Luke shouldn't need any Lasix at this point, but he may be one of those kiddo's who doesn't follow the "rules".

His sat's were also back up to the low 80's, so that was another sign he's feeling better and his lung is clearer. Thank you for all of your thoughts and prayers and keep 'em coming! We are GRATEFUL for them and for you!
Posted by The Smith's at 2:23 PM 0 comments

We took Luke back to the pediatrician's today since he has developed a little cough and after a chest x-ray at Mary Bridge, it looks like he has accumulated some fluid in his right lung. Dr. Stefanelli is hopeful that increasing his Lasix (or diuretic) from one time to three times per day will help push that fluid out. We will go back to Stefanelli's on Friday to get another chest x-ray and see where we're at. If the lung hasn't improved or looks worse, it is most likely Luke would be admitted to treat the fluid with I.V. Lasix, or worst case scenario, a drain tube. We are definitely praying the x-ray looks better on Fri. with this first step!!!

It's interesting, but kids after they have the Glenn (his latest surgery) and then the Fontan (his next surgery), seem to struggle with fluid build-up in their lungs. It has to do with his unique circulation ... no longer is his heart directly pumping blood to his lungs, but the blood basically drains there passively through blood pressure. As I understand it, without the pump action, it is harder for a body to move fluid through the lungs. And of course, heart babies tend to hold on to fluid more than other kids as well.

So, that's the scoop. The good news is that he seems to be feeling much better today, we're back to getting regular smiles and his energy seems to be picking up. His ears also looked really good, so the Amoxicillan is doing the trick with that infection.

Prayer request would be specifically that the oral Lasix would get rid of the fluid in his right lung and he would not need any more aggressive treatment.
Posted by The Smith's at 7:02 PM 0 comments

We've been home and doing really well for a month and a half now, but Luke seems to have caught the cold bug going around and it seems to be hanging on. We took him to the doctor yesterday and it looks like he has an ear infection as well. He is pretty miserable and we are praying the Amoxicillin begins to fight the infection quickly. Please pray that Luke begins to feel better soon and there wouldn't be any complications with this bug he's got. With the heart surgeries, we knew his discomfort had a purpose and we had lots of medical support ... although this cold is much less serious, it's tough to feel like there's very little we can do to make him feel better. Thank you for your prayers!
Posted by The Smith's at 1:28 PM 0 comments