Thursdays are the craziest day of the week for our family. At the same time Luke and Roger are heading off to school, I take Laney down to her sitter's house so I can go into the World Vision office for the day. After school, my friend Erica picks up Luke and he hangs out with his buddy Marcus until the hubby picks him up around 4:45. At the same time, I'm picking up Laney and then finally we all converge at home for the night. Phew.

As soon as Laney and I walked in the door a few Thursdays ago, Rog told me Luke got a pass to spend his second recess in dad's classroom. The story unfolded that Luke told the recess duty that he just couldn't keep up with his friends today while they were all playing football. Mr. Chris, the duty, asked him if he wanted to go hang out with his dad for the remainder of the recess.

It was time for another sit-down conversation with Luke about his miracle heart.

Luke: "I don't understand why I can't run as fast as my friends when we play football."

Dad: "Do you remember when we talked about how God made your heart? And how it's different than a lot of other kids' hearts?"

Mom: "Do you remember what a heart looks like? How it has four different sections that have different jobs?"

Mom: "Exactly. Those sections are called chambers. Most people have four chambers in their heart but you only have three. You are missing your right bottom chamber."

Luke: "But why does that make me not run as fast?"

We explained a little about oxygen levels, how your muscles need a lot of oxygen to move, and how his one ventricle has to work harder to pump because it's doing two jobs instead of one.

Dad: "Do you realize, Luke, that the fact that you are playing football at all at recess is a big deal? Your heart is superman strong for only having three chambers. Do you feel like you aren't keeping up during other times, like playing with your friends at home, or P.E.?"

This is where you can relax knowing his confidence is intact ...

We explained that playing football at recess is harder because the field is so big and that you have to run a lot farther when you play outside. We told him he could find a different activity at recess, but he didn't love that idea since "all his friends play football". So we told him he'll just have to figure out a way he can play even if he's feeling like he's not running as fast or far. Or if he's not getting the ball. But ultimately, he's going to have to decide. As much as we'd like to, as much as we'd do anything we could to, we can't fix this problem for him and we definitely can't make it go away.

He asked, "Is it okay that I told the duty?"

Dad: "Yep. Mr. Chris already knows about your heart. All the adults at your school know about you."

"All of them? Does Miss Culver know? Mrs. Brumbaugh? Mrs. Miller?"

Dad: "Yep, they all know because when you were born and had your surgeries, Daddy had to take a lot of time off and so they knew about your heart. A lot of them even prayed for you."

Luke: "Do my friends know?"

Mom: "Not unless you tell them. That's going to be up to you."

Mom: "Do you know what jealousy means, Luke?"

Luke: "Yeah, like when you are sad because your friend has something and you want it too."

Dad: "I have three boys in my class, that just today, they struggled with an art project. Now they can catch a football really well, but art is really hard for them. You might feel bummed from time to time that your heart is different, but faith is trusting that God gave you this heart because he's got a big plan for you. You have to remember how many people have been blessed by your life already. And you're six!"

Luke: "Did Miss Culver come to the hospital to visit me? Mom, can I have more pizza?"

And that was pretty much the extent of the conversation. It was really good. I thank the Lord that He gave Luke a confident spirit so that he can see how many gifts he has been given. I pray that stays with him. I also pray so hard that he would never get to a point where discouragement causes him to stop trying.

Since then, we haven't heard any more rumblings about being discouraged at recess, and just yesterday, he came home filthy because he was playing football. So we keep pressing on, conversing with him as he leads.

Part of the above conversation also included talk about how karate might be a really good sport for Luke since it's not as much running as football. Luke has been begging to take karate for months, and this Tuesday was his first class: 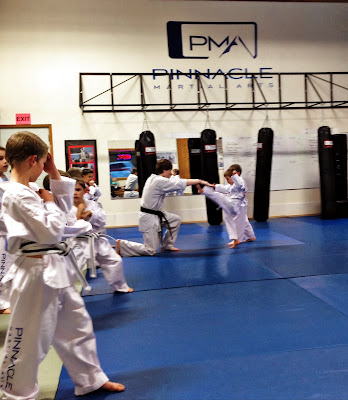 I think he got a kick out of it.

I hope this ends up being a good fit for him. He's a little bummed he's not playing basketball this year like he has the last two years. Maybe after the his next surgery we can revisit basketball, I don't know. For now, he's excited about karate so we'll see where that takes us. And we'll wait to see the unfolding of God's plan for our sweet boy.
Posted by The Smith's at 1:58 PM 0 comments