We've hit the 80's again this week and here's what Luke has to say about it:

NBC (not to be confused with the television network)

You could say two of the most important events in my life took place at NBC camps. NBC is short for Northwest Basketball Camps and is the largest overnight basketball camp in the world. My husband first attended NBC at nine years old as camper and from camper to coach to site director, he has not missed one summer since. Roger runs the Auburn, Washington site and as of this week, camp is again in full swing. It's a Sunday-Thursday overnight camp for campers aged 9-18 and Rog runs four weeks at his site.

I went to my first NBC camp when I was 14 and obsessed with basketball. I went every summer through high school, at which point I got hired as a coach at you guessed it, the Auburn site, by you guessed who, Roger.

But before the boy-meets-girl story happened, another meeting took place.

All week, I couldn't help but notice something different in my coaches. I wouldn't have been able to verbalize what was different besides saying it was something I wanted that I didn't have. I had never seen such genuine joy, joy despite circumstances.

Driving to LaGrande, Oregon, I had no idea that NBC was a Christian basketball camp, or that the gospel would be shared with all the campers. I just wanted to play hoops. Like in this instance, so much of my testimony consists of God pursuing me, placing people and circumstances in my life to draw me to Him — definitely not the other way around! On that last night of camp, after a week of being loved and encouraged by my coaches, my heart was soft and ready to meet this Jesus. I accepted Him into my life, confessed that I was a sinner, and allowed Him to make me white as snow (Isaiah 1:18).

Four years later, after graduation, I was hired to work as a coach at the newly-opened Auburn site. From the start, I had a gigantic, embarassing crush on this Roger guy (along with half the female coaches). Luckily, it turns out he had a crush on me as well! Next month, we will celebrate our 8th wedding anniversary: 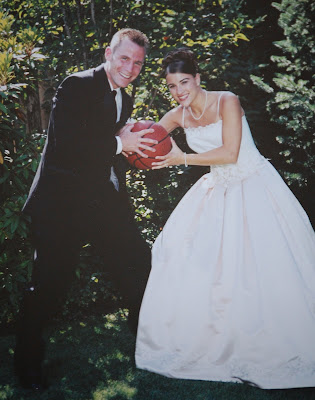 So as much as we miss Daddy when he's at camp, I wouldn't want him to be anywhere else. NBC is a basketball camp, but injuries happen and kids get cut from the team. What lasts is a relationship with Jesus and learning to serve and love one another.
Posted by The Smith's at 3:48 PM 2 comments

In May of this year, a new chapter of Mended Little Hearts was formed in the Puget Sound area. Mended Little Hearts' mission is to "inspire hope in those who care for the littlest heart patients of all" and includes group meetings, social events, hospital visits, educational and emotional resources.

This past Tuesday was the first official meeting and I would guess there were 12 families represented, so a good turnout! The hour and a half was broken up into three sections led by specialists in that particular area: Feeding issues, athletic limitations, and life after surgery.

In September the plan is for us parents to tour the cath lab and also have an echo tech talk to us about what exactly they do with that magic wand.

Next month, we'll have a MLH picnic with no agenda other than having fun and connecting with each other. Because as much as I love learning the ins and outs of my little boy's disease and how I can best advocate for him, there is something even better: being known. There is a depth of comfort found when sitting in a room with people on your right and on your left who have traversed the same valleys and peaks you have. Not the same same, of course, but the same.

I believe there is purpose in our suffering. Our suffering "produces perseverance; perseverance, character; and character, hope" (Romans 5:3). Although it may not always feel like it, our suffering never has to be futile. We have seen God do so many good things through Luke's story. We have learned perseverance and pray daily that our character would be more and more transformed so that we would be lights of hope.

Suffering purposes to change us, to draw us closer to our Lord and to see Him in a new light, as our ultimate comforter. How good God is to use our trials instead of letting them go to waste! As I sat in the Mended Little Hearts meeting, I was reminded of another purpose of suffering:

"He comforts us in all our troubles so that we can comfort others. When they are troubled, we will be able to give them the same comfort God has given us." —2 Corinthians 1:4

Whether we are giving or receiving comfort, these acts please God. I sat in the cramped room with moms and dads, all affected somehow by CHD, and received comfort from the fact that I am not alone. I hope I was also able to give comfort. A woman shared with me that she had found our blog and in reading through our story, took great comfort in seeing Luke so active and happy. Her heart baby had yet to arrive.

When I look at all God has done for us, how He's changed us, these past 3 years since Luke's diagnosis, how could I ever wish us on a different road? That's not to say I gladly accept trials. More accurately, I enter them kicking and screaming. I would have given anything for our ultrasound to have shown a four-chambered healthy baby boy's heart, but it didn't. So now what? Do I choose, in faith, to see the beauty God is producing through Luke's heart story; or do I dwell on the question, "why me?" Oh, there are moments, believe me, but God is faithful to not let me stay there.
Posted by The Smith's at 12:14 PM 2 comments

The third of July

I'm glad I took some pictures on the Third of July, since the Fourth of July saw no camera action. Lots of other action (mainly trying to keep hot, miserable Luke not-so-hot and a little less miserable), but no pointing and shooting action.

You'll look at these pictures and wonder where it went wrong. We're still wondering! The more I think about it, the more I believe that Luke + 88 degree heat = CRANKY.

On the third, we headed up to my dad's on Lake Tapps for some swimming and good eats: 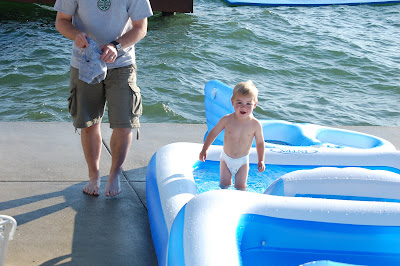 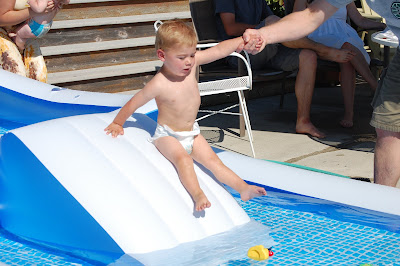 Luke wanted someone to hold his hand down the slide the first few times. After that, you couldn't stop the brave boy! 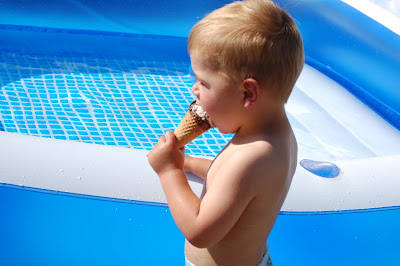 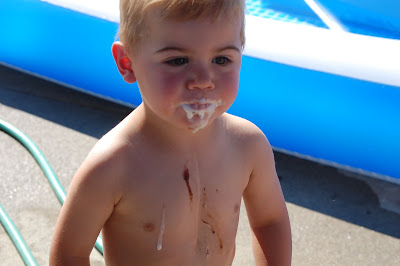 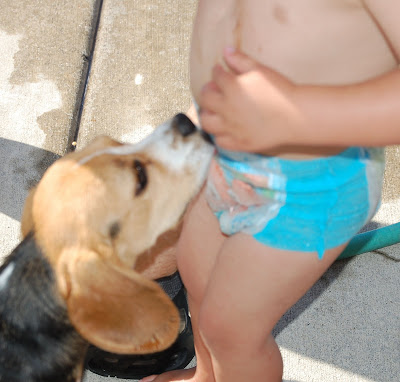 Ellie the puppy taking advantage Luke's ice cream drippings.
My sister and her boyfriend flew up from L.A. for the weekend festivities and by Sunday, everyone was chopped liver next to Auntie Jenny and Uncle Coleman.

After dinner, more trips down the slide, some frisbee-throwing and raspberry-topped brownies, we headed home to put Luke to bed. We had a lazy morning planned thinking Luke would be ready for the big 4th of July party in my mom's neighborhood.

Driving down, I pictured Luke squealing with glee as he zipped down the slip 'n slide, frolicking with the other kids at the party and happily watching the baseball game from the sidelines.

Why, oh why, do we set ourselves up with these outrageous expectations?

Luke didn't want to go near the slip 'n slide, he hated the screaming coming from the baseball field and he definitely was not into the heat.

We spent much of the evening in Nonna's house, playing with his Matchbox cars and track. Another large portion of the evening was me and Roger shadowing Luke, trying to get him to drink more and more water. (Do all heart moms worry about their heart kiddo's in the heat?)

Once it started to cool down, Luke's spirits lifted dramatically. By the end of the night, he was going strong, playing on the trampoline and chasing Papa. Rog and I on the other hand could barely keep our eyes open on the drive home. He wore us out!

After showers and jammies, we took Luke out on our upstairs porch to watch some of the fireworks in the town below us. He thought they were pretty fantastic until two ear-deafening explosions went off right across the street. He looked at us and said, "Okay, time to go in the house now!"

On Sunday, after trying to explain to Luke that he couldn't watch more fireworks, we headed back down to my mom's to get some more time in with his new best buddies, Jenny and Coleman. He, of course, was in a stellar mood, even without a nap.

Maybe next year he'll love the 4th, but even if he doesn't, hopefully I'll have learned to set aside my postcard-perfect expectations and to remember that these moments make all the hair-pulling moments worth it: 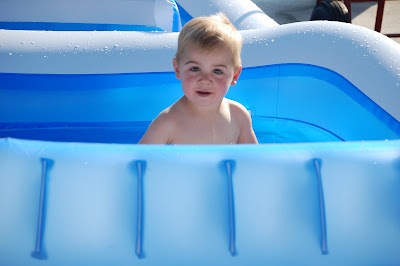