Actually, she's been here for a full week, but I haven't come up for air to post any pictures until this morning!

Laney was born at 3:07pm on Tuesday, May 17, weighing 6 pounds, 11 ounces, beautiful and healthy. We came home just 28 hours later and have been getting to know this sweet girl since.

Here are a few pictures introducing this little peanut! 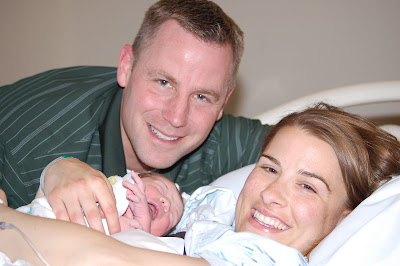 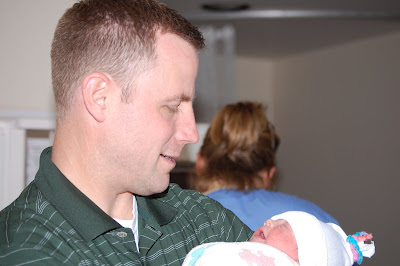 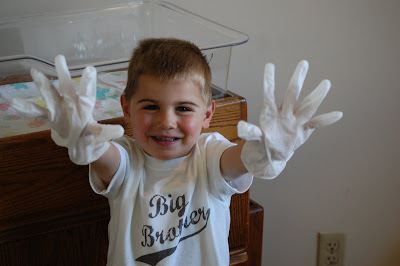 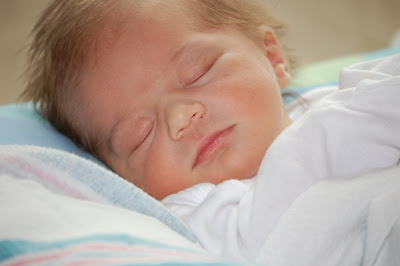 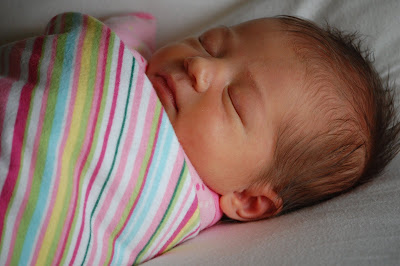 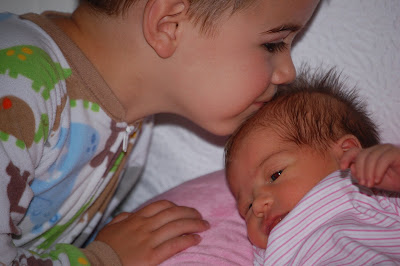 Ever since our "practice run" on Saturday night, Luke has needed to talk a LOT about when Laney's coming and what exactly will happen when Mom and Dad go to the hospital. Last night before we put him to bed, he asked several times if she was coming tonight. Luke is a need-to-know kid, and for him, the more details and understanding he has of a situation, the better he does. So, an "I don't know" response is tough for him. At one point, Rog told him, "Only God knows, Luke, when Laney is going to come. We just don't know. Why don't you ask God about it? Ask Him if Laney's coming tonight."

I didn't hear the "prayer", but I heard Luke run back to Rog a minute later and say, "Dad! God said 'maybe' she's coming tonight!"

God's response sounds a lot like Mom and Dad's!

Even though he (or we!) didn't get the black and white response he (or we!) wanted, he seemed to feel better after talking to God about it. He fell asleep soundly and slept through the night.

God is so awesome that even a "maybe" from Him can restore our peace!
Posted by The Smith's at 12:37 PM 5 comments

Before I had Luke, I would never have guessed that "going into labor" was not a black and white, clear-cut process. We've all seen the movies with the woman's water breaking in the middle of the restaurant, or the woman doubled over with contractions, racing in a taxi to the hospital.

With Luke, I had Braxton-Hicks contractions from about 37 weeks on, so on the night I did go into labor, the only way I could figure out if this was the real deal was to take a shower at 3am to see if the contractions went away. They didn't. It also helped that my water broke around 5am, giving me confidence that this boy was actually ready to come.

Last night, after an afternoon of just feeling "off", I began contracting every 6-9 minutes for almost 3 hours. My family was on stand-by, our bags were packed, I even jumped in the shower to shave my legs. But, as you can see, there are no pictures of a brand-new baby girl! Around 11:30, the contractions slowly started spacing back out and Rog and I were able to fall asleep.

I wish they would show these types of scenarios in the movies!

My contractions are noticeably stronger today, still, but I'm assuming that can go on for a while?? Just another example of God teaching our family to rely on His timing and not our own!

This morning, we told Luke that we thought Laney might come last night, but she must have just been teasing us. He thought that was pretty funny that she tricked us and said, "Yeah! Laney said, (in his Laney voice) 'Okay, I'm ready to come out now ... No I'm not!'"

Your timing Lord, but today would be a pretty great day to have a baby!
Posted by The Smith's at 10:20 AM 5 comments

Let's start with this guy's, who set up a "parade" around the entire perimeter of the bathtub last night: 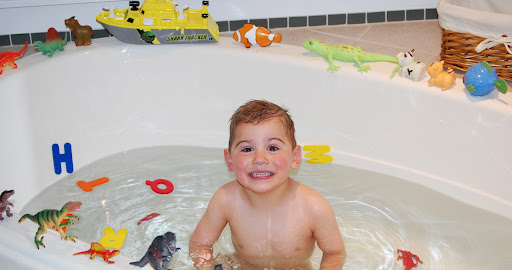 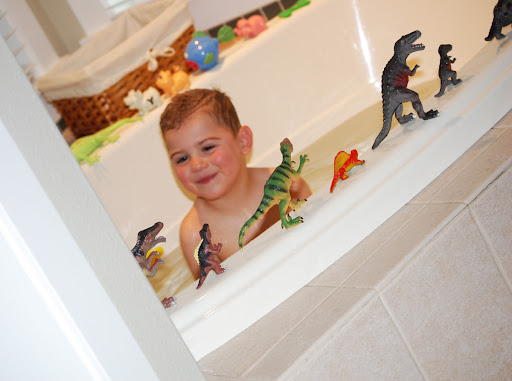 Of course there are always worries creeping in to my brain as these cardiology appointments approach, but I think I was much more nervous this time around than I've been in a long while. I'm sure it was a combination of being so pregnant along with Luke's 2-month battle with his cold and cough. It was hard for me to let his cold just be a cold and not attribute it to his heart function. I don't think I even realized how nervous I was until after the appointment when I experienced the adrenaline/emotion letdown.

All that to say that the news was good! Walking back to the car, I had to remind myself of that many times.

The only number I didn't love in that rundown was the 81% oxygen saturation. That is still a bit low for him, but I'm 95% sure that's still due to his clogged nose. The fact that Luke's sat's run on the high side for a Glenn is what is buying us time before his next surgery, so we definitely don't want to see those dropping. I am hopeful that they will bounce back up to the mid-80's once Luke is completely over this congestion (we're close, I think!)

With the motivation of picking out a new toy with Dad later that night, Luke was a star during all these tests, including the dreaded EKG. He worked so hard to hold back any fussing when we had to pull the stickers off.

We next got situated in the echo room, moving rolling and dinosaurs in hand. He whined a tiny bit when the echo wand was in his way and he "couldn't see the screen very well" but we got him repositioned and then he relaxed. Not to say there wasn't the occasional, "I'm ready to be done now" commentary. For a lot of the echo, I noticed he had his hand in the tech's shirt sleeve. Not sure why, but I think she was loving it. The echo was long, 30-35 minutes, but we made it through the last chunk of time with a sucker.

Did I mention relieved?

We'll head back in six more months, although I'll probably take him in this summer to make sure his sat's are heading back up.

The second appointment of the double-header was for Little Laney and Mama.

This little munchkin had a great report too! Heartbeat, growth, movement all made the docs happy.

I am currently 39 weeks and 1 day, and we are nervous but so ready to meet Laney. We continue to pray hard that she is totally healthy and that we can come home after a short stay! That she won't need the NICU, that she'll be able to breastfeed right away, that God would be glorified in her health.

Thank you for all your prayers!
Posted by The Smith's at 3:42 PM 5 comments

How could I not?

...have the best Mother's Day in the world? 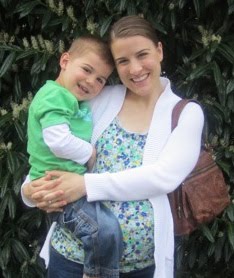 This didn't hurt, though, either:

We have now pretty much transitioned everything over to pinks and purples ... this better be a GIRL!

Baby will sleep in our room in a bassinet for the first bit, but her room is ready and waiting for her when we move her to her crib. I love how it turned out. With my zoom lens, it's hard to get wide shots of the room, but I did my best to give you a feel for it!

From the doorway, you can see the glider and the crib:

It took us a while to decide on a name for this little one. I thought for sure we'd have an easier time with her name than Luke's, but we went back and forth for quite some time! The middle name was a piece of cake. I always knew if we had a girl we would name her after my sister. There is one blank wall on the other side of the window that we finally purchased something for. And I think we're sure enough about the name to finally hang these: