I was going to post about Luke's seemingly never-ending cough that likes to roar its head when our heads hit the pillows and how 12 days of not-great sleep does not make for a happy mom or dad.

Then Luke and I were in the car this morning and the perfect opportunity arose to teach him (um, maybe more like me!) a lesson about gratitude.

On our way to the gas station this morning, there were two or three things he whined about in a row. First it was the sun in his eyes, then it was a car he dropped that I couldn't reach, then I think there was a third but maybe I've blocked that one. Anyway, I took a moment while the gas was filling our car to tell my son that we have a choice. To focus on the things that are bothering us or to focus on all the good things we have to be thankful for. And when we focus on the bad, we all know what happens ... we get whiny! So we listed a few blessings (the sun is out! our favorite song is on the radio! we're heading to a friend's house! our neighbors have baby chicks!) and I prayed that this lesson would really sink in for Luke. I have a sneaking suspicion the lesson was for me just as much as for him.

I have been thinking so much lately of a fellow heart mom and her daughter, Carla. Carla (HLHS) is one year post-Fontan and currently battling Plastic Bronchitis. The only solution at this point is a new heart. I knew a little about Plastic Bronchitis because our first heart friend, Maddie, battled it as well soon after her Fontan. It is not a pretty condition. So Jen, Carla's mom, sits at the hospital day after day, praying that Carla will be well enough to accept a donor heart. While she is sitting there, begging God for her daughter's life, I find myself whining about this persistent cough of Luke's and how it's affecting my sleep. So, in honor of Carla, I will choose today to live with my eyes open to God's hand of goodness and the blessings I so often miss.

I can't say the same for my 4-year-old, but that won't stop me from drilling it in his sweet head!

(None of the above means I don't take Luke's coughs and colds seriously ... we even popped in to our cardiologist's on Wednesday to let him listen to Luke's lungs to make sure it was still just an upper respiratory virus. It is and we are very thankful for clear lungs!)
Posted by The Smith's at 7:15 AM 6 comments

As soon as I typed that title, gratitude flooded me that Luke and I were just playing ambulance and not actually re-experiencing his ride from Tacoma to Seattle four years ago. 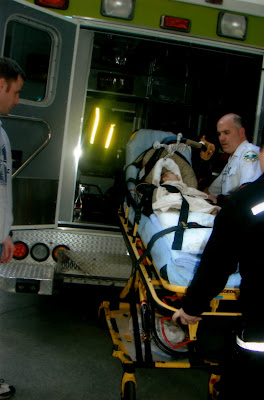 As we were playing on the floor, I reminded him that he got to ride in an ambulance one time when he was a baby. "Do you want to see a picture?" He did, so we headed downstairs to pull out the photo albums. That set of pictures also included pictures of the hospital cribs, NG tubes and nasal cannula and a red angry scar that had yet to turn a nice faded white. We hadn't looked at these pictures for a while, so I was watchful as to how Luke would react to them. He didn't seem bothered by them, just curious. "Did I cry when that yellow tube was in my nose?" "Was I at the hospital to get a flu shot?" (Nothing is worse than a flu shot in Luke's brain! Honestly, if you asked him if he'd rather have a flu shot or open heart surgery, he would pick the surgery.) And then this question: "Will baby sister cry when she gets her heart fixed?"

I was floored. Luke has never made a big deal of his scar, or even seemed to take much notice of it, so I have always thought that, in relation to others, he doesn't see himself as a boy with a different heart. But maybe I was wrong. Maybe, instead, he lives as though it's normal to need to get your heart fixed, and that just like being born, or getting flu shots, it is something that everyone experiences.

I told him that baby sister doesn't need to get her heart fixed, that God only made Luke's heart special in our family. He was totally fine with that answer and was ready to go play more ambulance. Most encouraging to me from that question, is the fact that Luke truly doesn't feel different, or perceive himself as different, from his friends. Roger and I want to foster that attitude for as long as possible. It won't be forever, but at four, we love that his heart isn't a defect, but simply a fact of life.

I had ordered Luke a Medical ID bracelet a few months ago, etched with his name, diagnosis, medications, and O2 sats. I thought he might be old enough to start wearing it at preschool, or when he is on a playdate and I'm not there. My husband (a teacher!) however, brought to me a different point of view, which sparked a good conversation. He felt that a bracelet at school will automatically separate Luke, and identify him as "different". I honestly hadn't even thought in that direction, but I think he's right. He told me that schools take very seriously their students' medical histories and if there was an emergency, the information I provided at registration would be easily accessed. (Not to mention our house is two minutes from Luke's preschool). In a playdate situation, we agreed we could give the bracelet to the caregiver to hang onto. And when Luke is a bit older, if he wants to wear the bracelet, or maybe a necklace, which would be more easily hidden, he definitely could. I never could have predicted some of these conversations when Luke was diagnosed! I'm so thankful to have a partner like Roger on this road that is constantly changing and where we are forced to learn and re-learn, communicate and communicate some more.
Posted by The Smith's at 7:28 AM 4 comments