One year since Glenn pre-op catheterization

July 20 marked one year since Luke's first cardiac catheterization, which was necessary before he underwent the bi-directional Glenn. Since Rog and I had yet to enter the blogging world at that time, I wanted to create a post that records that day last year, for us and for Luke. Ultimately, I want this blog to be a gift to Luke when he is old enough to appreciate it.

Luke's cath was done by his pediatric cardiologist, Dr. Stefanelli, at Mary Bridge Children's Hospital in Tacoma. Dr. S. specializes in heart cath's and does several a week. It was comforting to know that someone who knew Luke from before he was born and cares about him would be performing the procedure. We knew Luke would be in the best hands.

We were to check into Mary Bridge at 6am and the cath would get started around 8am. Luke did pretty well for not eating since midnight and getting woken up early. We were placed in a pre-op room and his vitals were taken as Rog and I signed consent forms. Dr. S. came by to see how we were doing and explained again the procedure. They were hopeful that they would be able to keep Luke sedated without putting in a breathing tube. There would be an anesthesiologist in the cath lab with him along with a nurse.

That morning is a bit hazy, but I do remember handing Luke over to the nurse and watching her dance him away to the lab. I just remember him looking so stunned ... too stunned to cry, which was a good thing for mama!

Roger and I, my mom, and our friends Troy and Scott settled into the waiting area to, you guessed it, wait. Scott and Troy graciously made a Starbucks trip and I fiddled on the computer and flipped through magazines. About 45 minutes after saying goodbye to Luke, Dr. Stefanelli came out with an irritated look on his face. He told us Luke was doing great with the sedation, but the cath monitor was not working. A tech person was working on it, but it was a possibility they would have to move to a different lab. As long as Luke was safe and asleep, I didn't mind, but I could tell Dr. Stefanelli was not happy about this technology problem. He told us to hang in there and headed back again. After another 30 minutes or so, the call was made to move Luke to the other cath lab and begin the procedure with a working monitor.

The next time we saw Dr. Stefanelli was when the cath was complete. He came out to report that Luke was a good candidate for the Glenn (big sigh of relief) and that his heart was showing it was ready for this next stage. We already had the Glenn scheduled and Dr. S. was fine with keeping the August 7th date.

We headed back to the post-op recovery area to see our little man. He was still heavily sedated when we got to him, but he looked good. He had one IV and a large bandage pressurizing the femoral artery. The nurse caring for him was anxious for him to open his eyes, but even though he was stirring and agitated, he kept his eyes closed. After another 30 minutes without Luke waking up, the nurse encouraged us to try and feed him pedialyte, rub his head, and talk to him so that he would come further out of sedation. As anyone would be, Luke was clearly annoyed and began kicking and thrashing. All of a sudden there was blood everywhere as his clot loosened with all his kicking. I'm not typically a squeamish person, but this scared me. I think it was so intense also because we had been out of hospital/medical mode for several months and this was a quick, rude reintroduction to that world. I remember leaving Luke's bedside and feeling so angry that he had to go through this. How I wish it could have been me in that bed.

The nurses quickly got the bleeding under control and Dr. Stefanelli came back to make sure everything was okay. After a stern lecture from Dr. S., Luke decided he better behave and began to wake up a bit more from his sedation like a good boy. We were moved back to a private room for a few more hours of observation and Luke continued to become more alert and want Pedialyte and even a little formula. There was some discussion about keeping him overnight, but Dr. Stefanelli felt comfortable sending us home that evening with Tylenol and instructions to call him if necessary.

As soon as we got home, I remember throwing away his hospital gown and giving him a warm bath. I wanted to get that hospital smell off of him! We had a couple more weeks of freedom from that smell and we were going to enjoy them!
Posted by The Smith's at 9:04 PM 0 comments

When Rog and I moved into our house a couple of years ago, we were looking for something to put on top of our armoire/tv stand in our bedroom. We found a neat wooden base that held wooden letters to spell a word. I really wanted J-O-Y, but H-O-P-E fit better (and I don't think the store had a "J"). It is amazing to me that I see the word "HOPE" every morning and every night considering how important hope has been to us since Luke's diagnosis in utero.

"Let us hold unswervingly to the hope we profess,
for he who promised is faithful."
—Hebrews 10:23

Our deepest hope is that God will use Luke and his heart defect to deepen or bring about faith in those who know him and his story. Luke's story, however long, has been written because God has gifted people to diagnose and treat his heart disease. I came across an article the other day that embodied hope for our family. Ultimately, Luke is God's child and only He knows the number of his days, but we are feeling very thankful that people like Robin Shandas and Francois Lacour-Gayet have not wasted their God-given gift of science and medicine, and continue to give us hope for a long life for Luke.


You can read the entire article here, but basically a surgeon (Lacour-Gayet) and a mechanical engineer (Shandas) have partnered together to prototype an artificial pump that would substitute for the right ventricle (the one Luke is missing). This pump would be implanted in single ventricle kids when their heart is full-grown, at about age 15, in the hopes of avoiding a transplant down the road. No one really knows what happens to hearts like Luke's when they reach their 40's and beyond, since the "fix" for a single ventricle heart is only 30 years old. This device is one way to prolong the function of the heart. Amazing, right? Yes, we have hope in the medical world, but our only true hope, one that will never fail us, is God Himself! 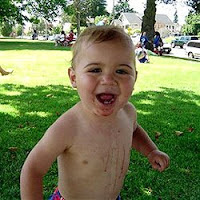 The joys of summer ... popsicle juice down the chin and chest!
Happy 18 month birthday, Mr. Luke Smith! How can one 31 inch little boy bring such goodness and joy to his family? How can one 23 pound little boy teach us so much about unconditional love and true perseverance? You have changed our lives for the better, Luke, and we wouldn't trade one of the last 548 days we've known you.

1. How certain you are of what you want and don't want.
2. How you giggle when we repeat correctly what you are trying to say.
3. You observe the world with such intensity and focus.
4. You get so excited about certain treats (i.e. "pops" (popsicles), "cream" (ice cream), chocolate chips), just like your daddy.
5. Your kisses are sincere ... we don't always get one when we ask!
6. You light up any room you are in.
7. How you say "Mama" and "Dada" so sweetly.
8. You love playing outdoors.
9. You have energy to spare!
9. You love music, playing the piano, singing; all except Papa Bill playing "rock 'n roll" on his guitar.
10. How you look for your "mimi" (pacifier) first on your chest, even when you don't have a shirt on (we often clip it to his shirts, so he knows to look there at nap and nighttime).
11. How you say "ape" for "amen".
12. How you "pretend-read" your books.
13. When you jabber in your own special language, with real words thrown in here and there.
14. How much fun you have in the bath tub and kiddie pool.
15. You are an independent spirit, strong-willed and determined. These traits have served you well in overcoming many obstacles.
16. How proud you are of yourself when you learn a new skill.
17. You teach us daily about God's love and provision for us; how much He wants us to trust Him with our whole hearts.
18. You are YOU, God's perfect gift to us.