I don't think I've ever dedicated a post to Luke's pediatric cardiologist, Dr. Stefanelli, but if you've read much of my writing, you'll know how much we love this man. The same day we heard the words, "We think there's something wrong with your baby's heart", Dr. Stefanelli, across town, had a cancellation. "He's really great. You'll like him," our OB said as she was setting up our appointment with him.

We had no idea.

No idea that this doctor would care so deeply for his patients.

No idea that he would be such an advocate for Luke.

No idea how deep gratitude can run.

I remember the day of Luke's first open-heart surgery. He was five weeks old and was supposed to have the Norwood procedure. We were paged mid-way through the surgery, the nurse telling us that there had been a change of plans and can you come downstairs to talk with the surgeon? Dr. Cohen met us in a conference room and told us that after opening Luke up and running diagnostic tests, he didn't feel that the Norwood was necessary. He wanted, instead, to place a band around his pulmonary artery, restricting the blood flow to his lungs.

It was such a silly question when I think back on it. "What does Dr. Stefanelli think?" I had asked our world-renowned surgeon.

And his answer, "He agrees" tells me so much about our cardiologist (and our surgeon when you think about it). From the O.R. Dr. Cohen had called Dr. Stefanelli to confer (they do not work out of the same hospital).

It was critical to me that day that Dr. Stefanelli was on board with the change of plans and to this day, there are very few major decisions related to Luke that we don't bring Dr. S. in on. He is a willing guide with continual encouragement along the way to let Luke live fully.

I like to think that Luke has a special place in his heart, but I'm pretty sure all his patients feel that way. He is that good.

I have seen some fantastic media during this years Congenital Heart Defect Awareness Week and one blog post I came across literally sat me down. It's written by a pediatric cardiologist who shares how attending an infant's funeral at age nine opened his eyes to this emotional world of heart defects and very well may have shaped his future profession.


"I learned the personal and emotional side of pediatric cardiology long before I would learn anything scientific. I learned the way a mother will cry and be heartbroken. I learned how a father can have difficulty even standing up."

This, I think, is what I appreciate most about Dr. Stefanelli: He is willing to enter into his patients' lives. Even into their crazy fears and stunning pain. Before Luke's first surgery, when he was admitted to Mary Bridge with congestive heart failure and unable to gain weight, we had a very bad NG tube experience. Many of you have seen an NG (nasal-gastric) feeding tube placed and know that if done right, it's a fairly quick procedure. For some reason Luke's first NG tube placement took upwards of thirty minutes. Roger and I were pacing the halls as Luke screamed and frothed at the mouth.

That night, Roger and I were sleeping on a cot next to Luke's hospital bed, where he was under treatment lights for jaundice. Around 10 pm, Luke woke us up with an ear-piercing scream and deep coughing. His sats immediately dropped from 85 to the low 70's for no apparent reason. We couldn't get him calmed down and Dr. Stefanelli was paged to the hospital. He quickly transferred us upstairs to the PICU where Luke was out of control in pain. At one point, the attending physician and Dr. Stefanelli were over his bedside and the attending thought she saw one of his pupils dilated. Luke was arching and writhing in pain and no one knew why. Roger and I were standing outside the PICU room and Dr. Stefanelli knelt down to talk to us. I couldn't stop myself from asking, "Is he going to die?" Roger and I were so new to this world and had no idea what was going on.

Dr. S. was so gracious and gentle with us. He looked right at me and said, "No, Jesse. I didn't bring him up here in case of resuscitation. But I am concerned he may have aspirated or we may be dealing with a clot. We'll schedule an MRI for the morning. You guys go downstairs and try and get some sleep."

After Luke had calmed down and fallen asleep, Rog and I tried to get a couple of hours of sleep. At 6am, we heard a knock on our hospital door (they had let us sleep in the room Luke was in before being moved to the PICU). After, I'm guessing, very little sleep himself, Dr. S. was back at the hospital, checking in on us. He was honest and said he couldn't sleep trying to figure out what happened the night before. He walked with us through that difficult day, until we had some answers. Thankfully, the MRI was clear and it was assumed that the difficult NG placement caused Luke to aspirate.

I know these doctors have to have a work/life balance and can't possibly take on the burdens of all their patients' difficulties. But I also believe the good doctors care deeply about their patients and understand that these kids aren't just clinical files to be opened and shut. I believe with all my heart that Luke is more to Dr. Stefanelli than just another heart patient.

And I am so thankful for that.

If you read the post by Dr. Thomas I linked to, make sure you also read the comments. A few are from Dr. Thomas' families and they express so beautifully how grateful they are for a compassionate partner in which to navigate this road. One woman (a 37-year old CHD survivor!) comments, "Growing up, my best friend was my cardiologist. I thought everyone else had one, too. ... I know that it takes special people to be able to care for small children with such a grown-up problem."

There is nothing Roger or I could say or do that would adequately express our gratitude to Dr. Stefanelli. Let's just say that if he were to move practices, we would very likely pack up and move as well!

Heart Mama Stefanie, over at When Life Hands You a Broken Heart, posted this video today and to my surprise, I saw Luke's heart surgeon's face appear after pushing play! It's a beautiful video depicting the dedication of these doctors treating these little miracles.
Posted by The Smith's at 10:31 AM 2 comments

I'm Smart About My Heart

I find it so fitting that the first book Luke authored is about his heart. 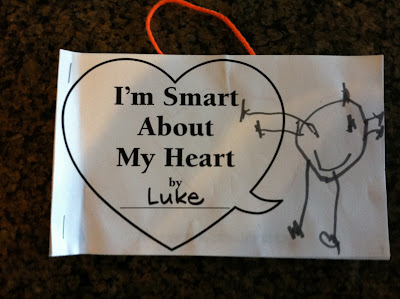 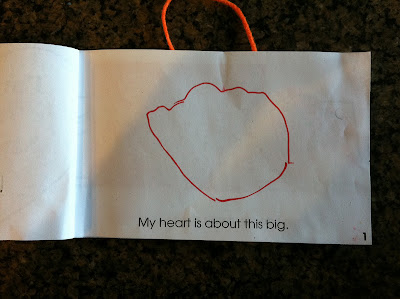 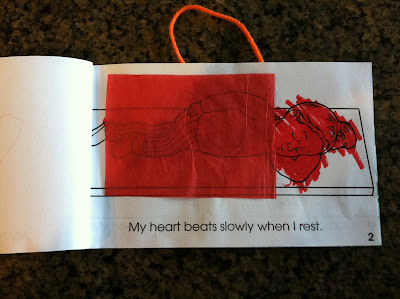 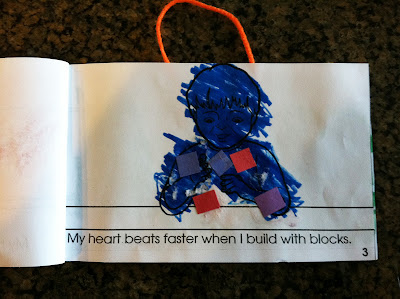 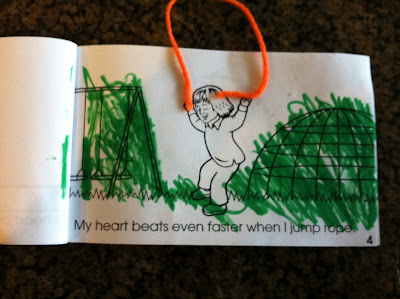 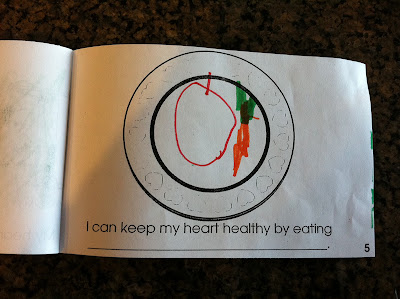 I so wish eating carrots and apples were all it took to keep your special heart healthy, buddy. 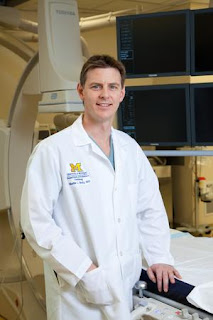 Dr. Bocks is leading a team of researchers and scientists to develop a battery-free, miniature cardiac implant that will improve care for kids exactly like Luke. Every six months, Luke undergoes a series of tests at his cardiology appointment (EKG, oxygen saturation level check, blood pressure, weight and height, and echocardiogram). All of these together give his doctor a good idea of how his little heart is doing. But there is some information that can only be gathered by more invasive procedures, such as a cardiac catheterization. Luke has had two of these in the hospital, one before his second heart surgery to gather information about his heart pressures and function, and another to balloon open his aorta, which had narrowed, making his heart have to work harder than necessary. Catheterization procedures are done under general anesthesia and typically include a full day, sometimes a night, in the hospital.

This implant device, shaped a bit like a mushroom, is only 2 or 3 millimeters wide but can give cardiologists powerful information in real-world scenarios. The information in a cath lab is good, but it's obviously a very artificial environment, with the kids under anesthesia. With this pressure sensor device implanted, doctors will be able to read blood pressure levels within a heart chamber as the kids are at rest or at play while they are in the clinic.

If your child has ever been under anesthesia, you know how big this is!

Dr. Bocks says this about the device (which he hopes to see in market by 2013):


“We expect the device to decrease the number of heart catheterizations, help doctors better monitor the effects of medications, and provide early detection for conditions such as blood clots in lungs.”

“We also hope that it will help us conduct more research,” he adds. “We’ll be able to obtain information from patients when they are sleeping, or exercising – information we had not been able to get to before.”

In an interview with the Holland Sentinel, Dr. Bocks explains how this device could be used to benefit heart kids:


"What will this cardiac implant allow you to do now with your patients?
The patient comes in and they’re not doing well, their activity level is low; they can’t do much without getting short of breath. Let’s say you want to start a new medication on this patient. Now what you can do is start a medication and follow the pressure in the heart chamber much better. Now we have the opportunity to say ‘OK, he started medicine let’s see daily for a month what happens.’"

It's National Heart Month. Let's all keep eating our apples and carrots and supporting those like Dr. Bocks who are bringing hope to heart kids!