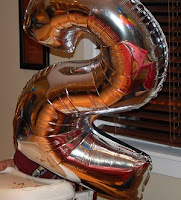 Luke turned the big two on Friday, January 9. Two. My baby. I am floored that I have a child old enough to want to eat at the big table instead of his high chair. Old enough to tell me which song he wants to listen to when we're driving in the car. And old enough to understand that he can entertain people.

It goes without saying that Luke was the center of attention at his birthday party, but what surprised me was how much he enjoyed the attention! I've never seen this "hammy" side of him, this side of him that likes to make people laugh. I guess I shouldn't be surprised. From the day he was born, he has been a light to this world. His name is perfect: "Bringer of light and truth."

Luke's big party was a family affair: Grandmas and Grandpas and Aunts and Uncles. We had chicken wings, tacos, veggies with dip (well, just the dip for Luke as he'd lick it off and then throw the veggie away) and of course, cake and ice cream. We played with his new water table from mom and dad, opened presents and introduced Luke to the ultimate party game: the piñata! We filled this piñata with M&M's, bath crayons, new mimi's (pacifiers), fruit leather, play-doh and starbucks and arch cards for the guests. It was a mad scramble when the first person spotted the plastic!

Despite boycotting a nap that day, Luke was such a joy the entire party. I was half waiting for a melt-down, but it didn't happen! After our family left, we put Luke in the bath and started his bedtime routine. He was so tired after all the festivities that he fell asleep in my lap when we were saying prayers. What a fun day and what a fun boy.

Here are some of my favorite pictures from the day: 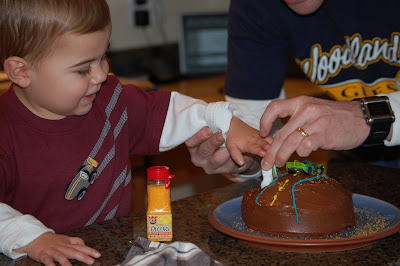 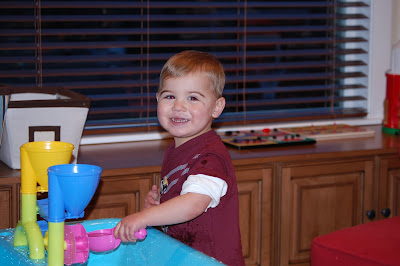 Playing with his new water table. It was a birthday miracle that he let us push his sleeves up to play. He does NOT like that! 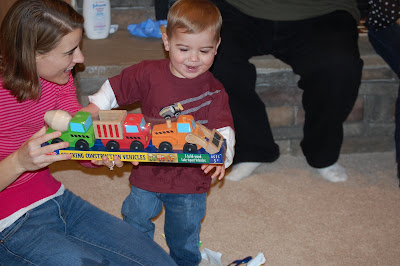 Opening presents! This is a wooden truck puzzle from Uncle Willie. 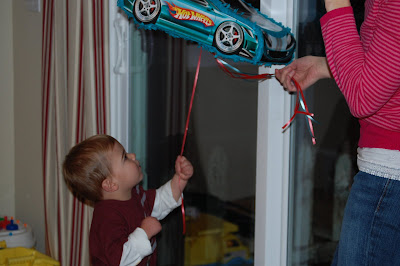 I guess they had too many injury claims with the old-fashioned "hit-the-piñata-with-a-stick" piñatas. Now they have kids pull a string until they pick the one string that opens the piñata door. Thankfully, we have no injuries to report! 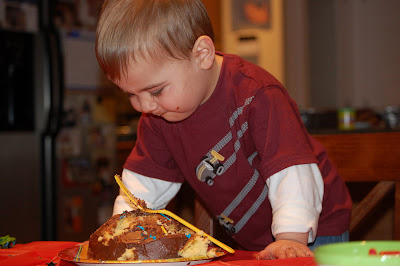 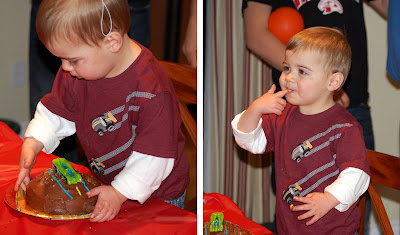 And this was Luke's mission strategy. Poke cake with finger then lick. Repeat.

Luke's sat's were a steady 86% today at our check-up, to our huge relief. It seems like this dip was just one of those hiccups that will make up Luke's life with CHD. I'd rather do without, but smooth-sailing doesn't increase my faith I'm learning.

Dr. S. does not think this dip has anything to do with discontinuing his Lasix, so we chalk this up to a big question mark. I'd rather have a definitive answer, but again, God wants to increase my trust in Him.

Thank you for all your prayers and thoughts for Luke this week, we so appreciate you checking in on us and keeping us in your prayers! We have been given the open door to pop in for a sat check anytime we want, but we'll keep our next scheduled appointment for June.
Posted by The Smith's at 12:04 PM 2 comments

UPDATE:We talked with Dr. S. and he thought that Luke's chest x-ray was a tad bit hazier than his previous (granted, his previous was over a year ago), but isn't ready to attribute this to stopping the Lasix. We'll head back in on Friday and if his sat's are the same are higher, great, if they are again lower, Dr. S. will probably do another echo. Rog and I are prayerful and hopeful.

ORIGINAL POST:I took Luke to Dr. Stefanelli's this morning to get a quick sat check, mainly to put my mind at ease. I've caught myself several times over the past two days over-analyzing everything Luke does. He napped three hours, does that mean he's more tired? Are his lips blue after his bath? Is he breathing harder? Ugh.

His sat's were between 80 and 83, which was definitely low for where Luke has been the past year. So Dr. S. ordered a chest x-ray to rule out fluid either in his lungs or pleural space.

Nurse Jodi called around 2pm and said that she and Dr. Park gave the x-ray an "all-clear", but Dr. S. wanted to look at it as well when he returned from a satellite office. I think I am glad that his lungs are clear, especially because we just discontinued two of his diuretics and I didn't want that to have caused the issue (most kids post-Glenn aren't on any diuretics). But now I'm wondering why his sat's have dropped? It could be as simple as he's growing or he's fighting a virus that's causing his oxygen perfusion to suffer a bit.

Dr. S. wants to re-check his sat's on either Friday morning or Monday morning and see where we are. If it's a little bug, he should trend back up. Let's pray for that! I am thankful we had a thorough echo two weeks ago, so I can rest assured that this doesn't appear to be a heart function issue. I am also thankful that my concerns are never brushed off by the nurses and docs at NWCHC. So thankful for a team that is so quick to work with us!

Luke has been talking this afternoon about his x-ray experience. He says that Mama wore a "funny dress" (x-ray apron) and that he "look fish" (looked at a fish sticker to position him for the x-ray). Finally, he talks about the "cat picture" (we "took" an x-ray of a cat in his book to show him how it works). What a big, brave boy. He fussed a little when we had to hold his arms up, but overall he did just great. The Elmo sticker didn't hurt, either.
Posted by The Smith's at 3:51 PM 6 comments

Luke woke up at 1:30 today from his nap and we snuggled for a bit before going downstairs to get him ready to go to Nana's house for the afternoon. I thought his color looked a little off, but didn't think much about it as I fed him lunch and changed his diaper. A few minutes after my mom came into the house, I asked her if she thought Luke looked blue. She said that was the first thing she noticed but she didn't want to say anything right away. The area around his lips and his hands looked bluer than I've ever seen, so I called Dr. Stefanelli's office. I talked to our nurse and she said she would call Dr. S. and call me back. At this point, my heart rate had picked up and my knees started to shake. It's just been so long since Luke has given us a "scare".

Our nurse called back and said that as long as the inside of his mouth and his sternal area don't look blue, Dr. S. isn't worried. She said we were welcome to come by for a sat check if we wanted, but it's pretty common for heart kids to have perfusion inconsistencies after sleeping, if they're cold, or coming down with something. What scared me is that we just don't see that in Luke. His color is a really consistent pink.

Roger came home from school to help me decide if we should take him in, but by the time he got here, Luke had seemed to pink up (hard to tell after staring at him for so long!) and showed no other desaturation symptoms, such as respiratory distress. He was playful and happy to head to Nana's.

In one instant, I was brought face to face with all my fears and the absolute reality of Luke's heart that is so different from yours and mine. When we were in the hospital with Luke, facing those fears was the norm. But in this stable stage of our journey, seeing Luke show visual signs of his heart defect felt like being knocked in the head with a 2x4.

Today I was reminded that Luke is on loan, he is not ours and that God is Sovereign. And when I stop and think about it, that's an o.k. place to be.
Posted by The Smith's at 3:17 PM 4 comments