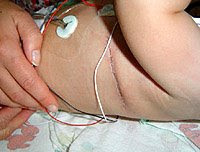 Another scar, another day
Luke is doing well and sleeping soundly after his diaphragm surgery last night. It amazes me what this kid has to battle through and he does it with a smile on his face. Yesterday, he had to stop eating around noon and he wasn't taken back to surgery until 8:30 p.m. I am truly not exaggerating when I say he was giving us big smiles even up to the point we had to hand him over to the anesthesiologists. 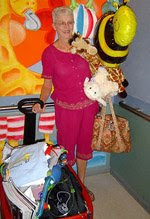 Grandma Janis helping us move
our wagon of stuff from our room
on the Giraffe Floor out to our R.V.
while Luke recovers in the I.C.U.

It was a late night as we didn't get to see him again until 10:30 p.m. But he looked great and the surgery went without a hitch. He came out of the O.R. and stayed the night in ICU, but the plan is to move him back to the floor later today. He is currently on morphine, but they are switching him to a little bit less strong pain medication called Toradol. He is going to be pretty sore for a few days since the incision in his side is through layers of muscle. Poor guy, he was well on his way to healing from his chest incision! He also has a new chest tube in for any drainage, but not much has been draining, which is good. He has had a few small bottles overnight, so overall really good news. He is also on no oxygen this morning and his sat's are in the low 80's. That's already higher than we've seen since surgery.

Prayer requests would be for minimal discomfort for Luke over the next few days, also that he would continue to eat and that there would be no secondary complications from this surgery.
Posted by The Smith's at 11:06 AM