I have shared with some of you the story of Madeline (Maddie) Lester and how she and her family have touched my life through their faith, perseverence, and hope these past six months. We met Dave and Cindy (Maddie's parents) on the floor at Children's, after crossing paths with them several times in the CICU in August. Once we moved to the floor, one of Luke's docs mentioned another patient of Dr. Stefanelli's was here at the same time. She couldn't tell us who, but after a day or so of circling the floor with Luke in a stroller, we finally met this family we had heard about. I am so thankful for that day, because knowing the Lester's has made me and Rog better people. Not only did we share a cardiologist, but we shared a faith in Jesus Christ. I can't tell you how amazing it is to have Christian fellowship in the midst of such hard hospital days.

As you know, we took Luke home on September 6, after his Glenn on August 13. Maddie underwent her heart surgery on July 24 (her last until a heart transplant in her late teens or early 20's - she had hypoplastic left heart syndrome, one of the most complex congenital heart diseases) and was still looking at another month or so of hospital time when we left in September. We were able to follow Maddie's progress through her website (www.madelinelester.com), emails and visits. As Rog went back to work, as we settled in back at home and as fall turned into winter, still Maddie was at Children's. She had setback after setback, viruses and funguses and infections and a type of life-threatening bronchitis never seen at Children's. She was just one of those cases that puzzled doctors. She would be on her way to recovery and then find herself back in the CICU on life support. Thanksgiving passed and Christmas came. Maddie went into cardiac arrest three times and put on life support three times in her six month stay. In early December, it was decided her only option was a heart transplant, so she was put on the national registry. Her struggle was getting healthy enough to be eligible for a new heart. About 2 weeks ago, she came off the ventilator and was again on the road to recovery when she contracted a blood infection. Her heart stopped again and she was again put on ECMO (a life support machine that does the work of both your heart and lungs). Maddie fought hard for six months (always with a smile and "Maditude"), but her body was not able to recover from this last blood infection. Her brain hemorraged on Jan. 16 and she died that morning in her parents' arms.

Why am I sharing this with you? Because Maddie's life is the most perfect testimony I've ever seen of how faith in Jesus Christ can sustain, provide peace, and even joy in trials. This little 3 1/2 year old girl has left such a deep imprint on my life, I feel like I have to share her with others. Because of her spirit, and her parents' steadfast faith, hundreds, if not thousands, of people have come to know Christ, or recommit their lives to Him. I know God doesn't always use such difficult circumstances to glorify Himself through us, but I want to glorify Him all the same in my own unique situation.

I want to share with you the latest update from Dave and Cindy. I think it will give you a small glimpse into their beautiful faith. Rog and I went to Maddie's service on Monday, and it truly was the perfect close to this "time out" as Dave and Cindy call it. It's definitely just an end to a chapter, not the whole story. It's been a hard week for me, missing Maddie and grieving for her parents, but at the same time, I am filled with joy when I picture Maddie dancing and singing and laughing in Heaven, with no more tubes!!! 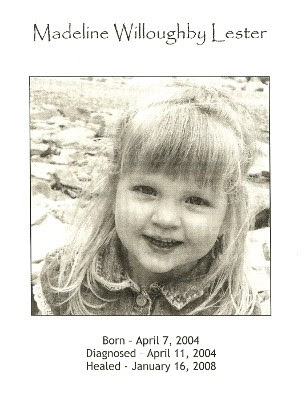 When I rose yesterday morning, the first thing I did was pray that the day would pass quickly, convinced that it would be one of the hardest, saddest days for our family. All week I envisioned my legs buckling at the sight of Maddie’s casket. I imagined falling on my face and sobbing at the cemetery. I thought about Anna and Sam and how they would be affected by the overwhelming gloom of the day. But you know, none of those things happened. There were occasional quiet tears and a few runny noses, but somehow peace prevailed. I looked over at Cindy a number of times and asked, "Are you okay?" and she looked back at me with the same curious disbelief and said, "Yeah, I am." I could not understand why we were not overcome with the grief I was expecting. My suspicion was that all of you ever-faithful prayer warriors were still lifting our family up (a fact that was confirmed by the flood of emails and guestbook entries). I failed to take the advice in Philippians 4 that says, "Do not be anxious about anything ..." but the next familiar verse that says 'God will provide a peace that transcends all understanding' showed up anyway. I've said it. I've read it. Now we have experienced it. Madeline endured long-suffering and managed to wear a smile through most of it. How could we possibly do less? In the end, the day went by too fast.

Attendance was completely overwhelming, which blessed us tremendously, but also left us wishing we had had more time. I can think of a dozen people right off the top of my head who caught my eye, but were never able to make contact. There were so many familiar faces from our families at Christ Memorial, New Life and Cornerstone Churches. Then there were numerous families we had never met before, who learned of Maddie through friends of friends, and had been praying for her and following her story. Some of them traveled a considerable distance to say hello and goodbye. Finally, there was the hospital staff. We knew Becky and Maree were coming, because they were in the program and we figured that a few others might make it as well, but we had no idea that half the team would show up! Just about every department and discipline was represented, with doctors, nurses, specialists, therapists, etc. It felt like we were on rounds for the last time. You cannot imagine how much it meant to all of us to see you there. (Actually it kind of ticked me off, because I was holding it together until you showed up!) I know there were many more who wanted to come, but couldn't. You were in our thoughts as well. Maddie loved you all.

We were overrun by people telling us it was the most beautiful and uplifting and hopeful funeral they had ever seen. We agree. We are so grateful to everyone who shared our Madeline and contributed to make it a perfect day. The message was perfect. The music was perfect. The weather was perfect. The walk from the church to the cemetery and up to the hilltop was perfect. The reception was perfect. And the food ... did I mention the food? No one is going hungry in our house, thanks to the never-ending river of food that is flowing through our front door. If eating is supposed to ease pain and sorrow, then I am the happiest guy on earth! Can we just say thanks to everyone for everything? You are in our hearts and on our minds.

When the curtain came down and the crowd dispersed, Cindy and I had a chance to walk back up the hill and share some quiet time alone and consider the day. The sun was just setting over the Olympic mountains and Liberty bay below was still. It was hard to look at the ground and imagine her buried there, having just had her in our arms last week. We tell the kids that that is just an empty shell, but I still long for it. — just human I guess. I have lump in my throat that I can't quite clear and my voice cracks if I travel too far down memory lane. She lived with grace, but I never would have thought a three year old could die with grace. Then again, Madeline did a lot of things that surprised us.

We're not sure what the future of her legacy will be. Some folks have mentioned keeping the web page alive, but Maddie was pretty much the cornerstone of that effort. We believe that God used Maddie for His own glory. He spared her by taking her out of this place, but I cannot believe that the He would have wanted the ministry to cease. It has always been bigger than us and we really want to keep it. However, when Maddie was first diagnosed and we searched the internet for information on her condition, we found no hope in stories that ended in death. For that reason we agreed when we started Madeline's web site, that we would take it down in the event of the ultimate bad news. We don't want to sap the hope from another family. We will be praying and listening for direction in the coming weeks and months. Maybe we’ll slap the story in a binder and publish it.

Love you all and if you think of it, Dave and Cindy and all of Maddie's family could use prayers in the coming weeks and months as they try to piece their life back together after such a terrible loss.

Here's an amazing slideshow Dave put together a few months ago, in preparation for Maddie's discharge. It was also shown at the funeral:
http://www.madelinelester.com/071129/071129.htm
Posted by The Smith's at 2:45 PM 0 comments

The best gift you could give Luke (and his parents!) for his big first birthday:

Thanks to each and every one of you for this past year — your support, prayers and encouragement have blessed us beyond belief.