On Wednesday, my friend Erica took Luke for a couple of hours to play with her son and two other boys (I know, she is the best). They played at the park and walked to the bakery for donuts. Then they headed to her house to play and that's where I picked up Luke. Erica and I were chatting and the boys were playing some sort of soccer/tackle game. The two boys, Reese and Drew, who are brothers, decided this game did not require shirts, so of course Luke and Marcus followed suit and wanted their shirts off. The game continued and I leaned over to Erica and said, "I will be so curious to hear what Luke has to say the first time he gets asked about his scar."

Not two minutes later, I hear Reece ask, "Hey Luke, where did you get that big scratch?"

I was somewhat waiting for this response: "That's where the doctors fixed my special heart." Or maybe even, "That's my superman scar. It means I'm tough." Both statements are what we have said about his scar.

Luke's response? A shrug and an "I don't know."

Then the game continued again. 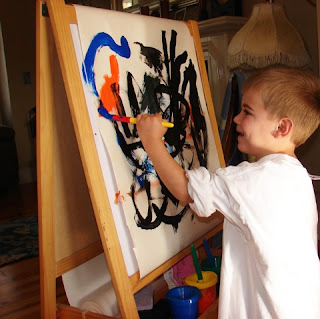 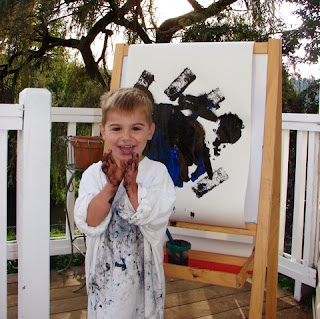 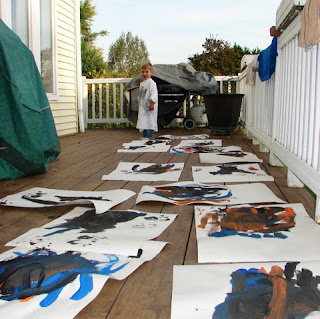 A smack in the face (in a good way)

Luke had his first preschool field trip yesterday to Maris Farms, a local pumpkin patch. Part of our time was spent touring the farm on a hay ride. During the ride, the driver was listing all the things you could do at the farm, one of them being taking a tour through the haunted corn maze. For some unknown reason, with a truck full of preschoolers, he made this scary ghost sound after describing the haunted corn maze. Luke picked up on it right away and wanted to know what that was, were we going to see it, why is it scary, etc. I told him it was a maze for older kids on Halloween, and we wouldn't see anything spooky or scary. "Will it come to our house?" "Is it spooky after we go to sleep?" This went on for several minutes and then I thought we were done.

This morning, we were playing in Luke's room and he said he was worried last night when he was going to sleep (he had called for daddy twice). He said when he closed his eyes, he saw some spooky things. THEN he said, "But then I talked to Jesus and he told me, 'Don't be afraid'. That's what he says: 'Don't be afraid, Luke'."

Call me humbled. And then call me reminded.

My week could be characterized as a fearful week. I felt it from several angles and I didn't like it. And I will be the first to admit my first response was not to ask Jesus to take it away, to take my thoughts captive and replace them with His promises. But today is a new day and I will allow Jesus speak to me the way He spoke to Luke: "Jesse, don't be afraid."
Posted by The Smith's at 10:20 AM 6 comments

I reversed over my sunglasses with my minivan yesterday.
Luke now has adopted a new pair of glasses to wear. 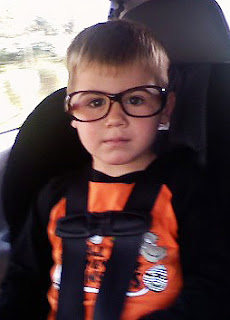