Laney just finished up her eighth month of life. In every way imaginable, it was different from Luke's eighth month.

Luke's eighth month was almost entirely spent at Children's hospital, recovering from the bi-directional Glenn, his second open-heart surgery. It also included an unexpected trip back to the O.R. for a diaphragm surgery. I try not to spend too much time dwelling on how different my children's babyhood has been, but this month the comparison was hard to stop. When Laney was touching her toes in sand for the first time, Luke was hooked to a ventilator, pacemaker, catheter, arterial line and a myriad of other wires. When Laney experimented with baby food and big-people food, we were counting how many cc's Luke was taking by bottle, fearful of weight loss. Laney, in her eighth month, was on two rounds of antibiotics for ear infections. Luke, in his eighth month, was weaning down from 12 medications to six. Laney learned how to sit up and scoot backwards. Luke was on restriction from tummy time and being picked up from under his armpits while his chest incision healed.

That paragraph is sad when I reread it. It makes me wonder how early childhood experiences shape a person. It makes me grieve once again for the pain Luke has had to endure and will have to again. When we were in Maui, I asked Rog if he remembered Luke as a baby being as happy and smiley as his sister. "I don't, but he also had a whole lot to be ticked off about."

It's true, he did. But the beauty of children is that perseverance comes naturally to them. They don't spend their time comparing their situation to another's or accumulating bitterness and anxiety. "Truly I tell you, unless you change and become like little children, you will never enter the kingdom of heaven." 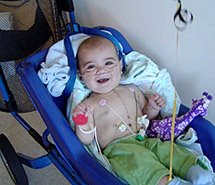 and this one of Laney at the same age...

...and am so powerfully reminded that no matter our situation — feeling the sand between our toes or lying in a hospital bed — we are asked to trust. With faith like a child, joy will abound.


On a lighter note, I did want to record more of Laney's exciting 8th month! This girl is getting so darn fun. She uses whatever is big enough to cover her face and play peek-a-boo, getting the biggest kick out of herself. She is babbling up a storm and she cracks us up with her "hiiii". Although she can't know what it means, she sure says it at appropriate times. This is her other party trick, the "bulldog":

When I took her in to have her ears looked at a week or so ago, she weighed almost 18 1/2 pounds. Oh, this girl and food. I remember at our six month appointment, Dr. Husarik told us we would have to gauge how quickly she moved through textures. My gauge says this girl is flying through textures. Pureed food? Yeah, okay, if it's my only option. But I much prefer table food! She "chews" and swallows like such a big girl. I gave her a sliced, toasted bagel the other day with cream cheese and she LOVED it. She ate almost half of the half. She's had sweet potato fries, scrambled eggs, toddler biscuits, graham crackers, puffs, noodles, black beans mashed up and cheese. The only thing I really haven't tried so far is meats. She is far less interested in nursing these days and to get any semblence of a full feed I have to take her in a quiet, dark room. Otherwise she wants to PLAY. I have never seen a kid so desirous to see what's going on. Good luck holding her facing towards you, or even on your hip. She has to be facing out and she will flip herself around so fast I've almost dropped her a couple of times! Maybe it's self-protection, to be always watchful of where her brother is :)


Even though her interest in day nursing is waning, she still wakes up once a night to nurse. I've said this before, but consistency is not Laney's middle name. She'll sleep great (from 7pm-3am, then down again until 7 or 8am) a couple of nights, and then we'll hear her fuss the next night a couple times before midnight, eat maybe at midnight and then sleep all the way until 7 or 8am. Do not bank on her! Although the timing of her naps are consistent, 9:30am and 1:30pm, the length can range anywhere from 45 minutes to 2 1/2 hours for her. Maybe some babies are just wired like this?


She still just has her two bottom teeth and I don't feel any signs of her top teeth coming in.


Her disposition is happy and then more happy apart from two main scenarios: holding her ankles to change her diaper and taking paper/plastic away from her/out of her mouth. Oh yes, she does have some fire like her brother.

She is learning to clap and she'll get her arms high in the air for "Soooo big!" She will copy you if you laugh and shake your head. She loves making things make noise. Any two toys she can get her hands on she'll bang together and then look at you with such astonishment that she made that happen.


Laney, we couldn't love you more if we tried. You delight us, sweet girl.
Posted by The Smith's at 6:40 AM