These one-year molars are no joke. Out of nine possible teething signs I found on totsites.com, Laney's hit them all: Night waking, hands far back in mouth, fever, drooling, irritability, clinginess, lack of interest in solids, etc. I don't recall even knowing when Luke was teething, so this is new territory for us. I feel the two molars on the top, but not on the bottom yet. I am ready to have my Laney back!

But she is not the only Smith with teeth woes right now. Luke took a nasty fall off his bike on Sunday, and I mean nasty. Busted lip, scraped chin and nose, and chipped front tooth. This was not a boo-boo. This was a big-boy fall. We saw his pediatric dentist this morning, who wants to see him again in three weeks when the swelling has gone down. From there, we'll check the health of that front tooth by x-ray. If it's not bruised, we can leave it alone or fill that chip. If it is bruised inside, we may need to pull it. Thankfully, he is only a year or so away from losing it anyway. I can't get a picture of his tooth since his lip is still so swollen, but here's his face the day after the fall:


Luke was riding (he just learned how to ride his two-wheeler two weeks ago) up in our cul-de-sac when he crashed. Roger was up there with him and some of the neighborhood kids and I heard the screaming from way up there. It was one of those moments that you don't even want to enter into. The first thing I saw was Roger's shirt, covered in blood. Mouth injuries and anti-coagulants make for a lot of blood. I was so thankful Roger was there to be the judge of what was what in his mouth. I was the holder. It was really hard to see Luke that hurt and upset. It automatically triggered for me memories of past surgeries and fears about his future one. Roger and I both felt pretty unsettled the rest of the day. Luke recovered much quicker :)

Here's what I love about this kid: When he was screaming right afterwards, he yelled out, "I never want to ride bikes AGAIN!" But the next day? 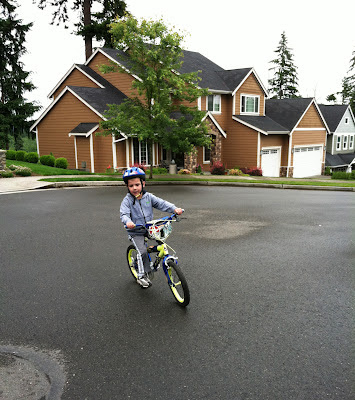